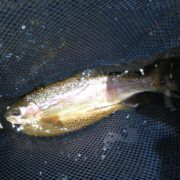 Summer is here and the time is right to get some fishing done, especially in Yellowstone National Park.  Crowds are at a very reasonable level at the moment. The Firehole River is fishing well currently, mostly with Caddis and Yellow Sally patterns in the afternoons and evenings.  White Miller soft hackles and adults are a good choice, but green caddis pupa are a great option. There are a few PMD’s left on cloudy mornings, but for the most part this hatch is done. As the day warms, don’t be afraid to try an adult Damselfly or nymph pattern.  With our warm temperatures and sunny skies, these patterns have produced some good trout.  Adult Damsels can draw explosive strikes! Best Flies: #14-16 Olive Emergent Sparkle pupa, #14 White Miller Soft Hackle, #14 White Miller Cripple, #14-18 Prince Nymph, #14 Headlight Sally

Rainbows and browns do get along on the Firehole! 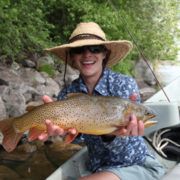 Happy Father’s Day! Fly fishing has remained consistent since our last report on the South Fork.  It’s even improved some with warmer temperatures.  Nymphing and throwing streamers is still the best way to get into good trout, but dry/dropper rigs have produced with some fish eating off the surface.  A few Salmonflies have been seen flying near Lorenzo, but the hatch has yet to get going full bore.  Water temperatures are reaching 52 degrees near Twin Bridges, so it won’t be long before the big bugs pop in earnest. Fishing has been best in the afternoons.  There are still BWO’s hatching and this has been a go-to bug in the riffles and their tail-outs.  Stonefly nymphs have produced, both larger Rubberlegs and medium sized Sallies.  There are lots of Mayfly nymphs active, just waiting to do their thing. The streamer bite has been better early and late with white being a great place to start and then switch to Olive or Black. Best Flies: #6-10 Rubberlegs, #12 Foxy Sally, #14-18 Copper Johns in Copper, Red, Green, Chartreuse, #6 White Dungeon, #6 Black Leech

Love to see two Rainbows in the net at the same time!

The Green River has been in runoff mode with flows reaching up to 2650 cfs!  The rain and snow we received Memorial Day weekend came crashing down with 80 degree temperatures shortly after.  This blew out the river and raised it to levels we didn’t think we’d see this Spring.   The river peaked this past Thursday and is now dropping fast! Currently flows are at 1720 cfs and the river is clearing.  At this pace, we should be back guiding on the Green by mid-week.  Looking for Salmonflies, Golden Stones, and Caddis to be on the menu.  Of course, San Juan worms will do the trick also after the high water. The Grey Drake hatch can’t be too far out, maybe by next weekend? 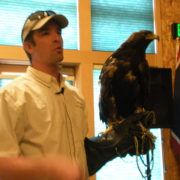 The Snake River Fund hosted the 14th annual Summit on the Snake yesterday at the Teton Science School.  This is a very informative day on local and regional issues and trends.  Highlights included talks on Birds of Prey, Pack rafting, and Flat Creek restoration in town.  This event is held for all river people, commercial and private, and hosts some interesting speakers from around the West. Looking forward to next year!

Jason Jones of the Teton Raptor Center with a Golden Eagle