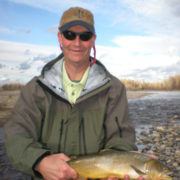 The recent wintry weather has intensified the surface action on the Snake River as our Cutthroat fatten up for winter. Midge and BWO hatches are occurring daily after 1pm, but may not begin until 2pm on colder days.  Riffles and flats are the best places to find this action, so take your time on these.  Bank structure does hold a few nice trout, but not as many as the riffles.  I prefer to focus on these and maybe throw a streamer between them.  Water temperatures dropped enough to slow the streamer bite some, but this should pick up the next few days as air temps are forecasted to be in the mid 50’s. Best Flies: #18-20 BWO Film Critic, #18-20 Para Adams, #18-20 Zelon Midge, #10-12 JB’s Rocktober Caddis, #6 Olive Morrish Sculpin, #6 Black Leech, #6 Gray/White Double Bunny, #6 JJ’s Special 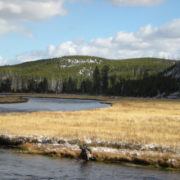 Pre-dawn 19" brown from the Snake River

The thermometer on my Tundra read 17 degrees as I pulled into the South Entrance of Yellowstone National Park.  It was 7:15am and still dark out.  The plan was to get to the Firehole/Madison/Gibbon Rivers early to fish for run-up Brown trout from Hebgen Lake.  Unfortunately the road was closed due to the snow we had been receiving with an additional 3″ overnight.  A quick search turned up an employee who said they were sanding the roads and were trying to get them open by 8am or so. I decided to make the most of my time and went ahead and rigged up and took the short walk to the Snake River. After all there were run-up browns from Jackson Lake in there too.  After a few casts with a dark colored streamer, I was quickly into the first fish of the day, a 19″ brown! By 8:30 am, I had released both 17″ and 18″ browns that looked to be pretty fresh from the Lake.  Not bad for a detour! I took off to get back on track with the original agenda, but Craig Pass was still closed, so I was forced to drive the long way east around to Canyon and Norris.  Along the way, I spotted a solo Bison trying to cross the the slow moving Yellowstone River, before I eventually made it to the Gibbon River below the falls.

The Gibbon’s low flows and spooky fish proved difficult, despite good cloud cover to shield my efforts. I finally landed a few good trout to 18″ near the falls after scaring off the rest of their breathren.  A #6 Natural Home Invader tied by Doug McKnight did the trick.  Soon the sun popped out from behind the clouds and all the low-light loving browns went in for a siesta around 1pm, so I decided to head down to the Madison to look for a Baetis hatch. I arrived at the Madison not too far below the junction to see a sporadic hatch already in progress. I pulled out the 4wt and strung up a #20 Pablo’s Baetis Cripple.  I managed to catch a handful of smaller rainbows and browns out of the long, slow-moving runs, but didn’t see any larger trout working the surface.  The same held true for the Firehole River near Fountain Flat before the bugs and rising fish subsided around 4:30pm. All in all, it was a great day with Browns being landed on both sides of the Continental Divide between 4 different rivers!

Love the blue spots on the browns!

An nymphing angler lands a nice brown on the Madison River 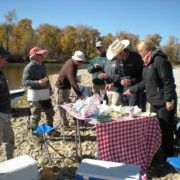 The South Fork has really picked up this week!  We had some rain at the beginning of the week and overnight temperatures dropped in to the 20’s.  This really woke up the brown trout, especially on the lower river below Cottonwood.  Throwing streamers has been great in the mornings and into the afternoon until about 2:30pm.  Think dark colors for early and late and then olive and tan during the middle of the day when the sun is high. Hatches of BWO’s, Mahogany Duns, PMD’s, and October Caddis have been starting around noon and keep the trout feeding off the surface until about 5pm.  The riffles are stacked with hungry fish that know winter is approaching.  I like to throw a double dry fly rig with an October Caddis out front and Mahogany Cripples trailing.  The caddis is great on fast water margins and bank-side pockets and the Cripple fools the pickier fish in slower water… Best Flies: #4 Bob’s Bugger, #6 Natural Intruder, #16-18 Mahogany/PMD Brooks Sprout, #10-12 Tan Tent wing Caddis, #18 BWO Film Critic, #16-18 Red Tailwater Humpy

David Moxam of the Clear Creek Group holds one of many nice trout from yesterday. 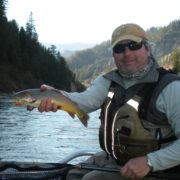 It has remained very consistent on the Snake River here in Jackson Hole.  Our fishing guides are still out on the water regularly getting clients into trout after trout.  The BWO hatch remains strong and the weather we are receiving today will only help it strengthen.  It rained hard here today and the river may even blow out tomorrow! All sections of the Snake are fishing well, but the whitewater might very well be the best.  Our new Aire raft is a spectacular fishing machine and is going to serve us well for years to come. The streamer bite is on as our Cutthroat fatten up for the winter.  There are plenty of trout feeding off the surface daily after 1pm on Blue Wings, Mahoganies, and October Caddis. The best part is that few boats are on the river! Best Flies: #10-12 Oragne Stimulator, #18 BWO Film Critic, #16 Mahogany Cripples, #6 Tan Sculpzilla, #4 Yellow Dungeon, #6 Black Leech

Darrell Ragan shows me how it's done...

Another one of many! 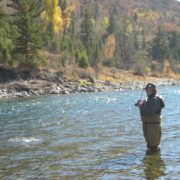 Our fishing guides are still reporting great things from the Snake River in the Jackson Hole valley! We had a cold front push through that dropped the temperatures into the upper 40’s and 50’s, but no precipitation.  This really sparked the Blue Wing Olive hatch on the lower river below South Park Bridge.  New riffles are showing after the flow drop and the Cutthroat are stacked up in them munching on these tiny morsels. Big bugs, you ask?  October Caddis are hatching and have been great in bank pockets and on the fast water margins. Dropping a Zebra Midge or BWO Micro Mayfly about two feet below has kept clients into fish all day. Fishing streamers has been fun for those who prefer the chuck and duck. A number of patterns are working, like Gray/White Clousers, Silvey Sculpins, and Black Leeches. Call and take advantage of our fall fly fishing special on the Snake River .  We’ll be running fishing trips into November this year…

We love it when fish like this eat dry flies!! 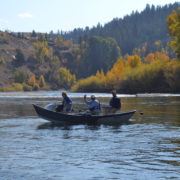 The Snake River here in Jackson Hole continues to fish well, especially on the surface.  Fall hatches of Mahogany Duns, Blue Wing Olives, and October Caddis have kept the Cutthroat looking up, but they definitely are not push-overs. The river has been dropped to winter flows of 300 cfs out of Jackson Lake Dam.  This has the trout podded up in the deeper runs and feeding in preparation for winter. I have lengthened my leaders to 10 feet and am using 5X to fool these pickier trout. The streamer bite is on! Bank-side structure is holding some large Cutties and can be enticed if the fly is placed within inches.  Dry-dropper combinations have also been great with nymphs running close to this structure. These are some really beautiful fish! Best Flies: #12-16 Mahogany Duns, #18 BWO Film Critic, #10-12 Orange Stimulator, #16-18 Lightening Bugs, #14-16 Zug Bugs, #6 Black Leech, #6 Tan Silvey Sculpin