I’ve heard a few solid fishing reports from anglers fishing the Snake River this past weekend.  High temperatures were in the mid 30’s on Friday and reached 40 degrees on Saturday.  Since these temps remained steady and did not drop overnight, our Cutthroat trout were active! Both nymphing and swinging streamers were productive in slower moving water.  There were a few rises seen, but not enough consistency to switch tactics. More snow on the way this week, with temperatures expected to be in the high 20’s…. 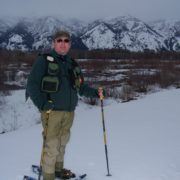 It’s crazy how warm 35 degrees feels after it’s been -20 for weeks!  We’ve got a front in from the Southwest and it’s bringing a little bit of snow and warmer temperatures.  There is no ice in the Snake River and the Cutthroat are happy!  Nymphing Midge patterns is the way to go  – Zebra Midge, Muskrat Midge, Black Beauty, Disco Midge.  You get my drift?

There has been alot of ice in the Snake River the past week, due to our below freezing temperatures.  I’ve been waking up to -20 degrees and we’ve been lucky if the highs make 10 degrees or so in the afternoons. This isn’t making for good fishing currently, but will improve over the weekend and into next week… We received a few inches of light density snow on Tuesday that made for some decent skiing, but we’re now into our temperature inversions.  Cold air is trapped in the valley and it is 30+ degrees above 10,000 feet. It is warming up enough in the afternoons that it will be worth getting out and doing a little nymphing with different Midge patterns. We’ve dropped to 96% of water equivalency in our snowpack from around 130% at Christmas.  Despite high pressure dominating for the next week, we are still in good shape for the summer, as April and May are typically our wettest months of the year.  Snow returns next Thursday…. 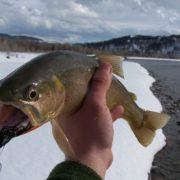 Winter fly fishing in Jackson Hole? You bet! It can be brutally cold during December and January in Jackson Hole, but when fronts move in and start dropping snow, the temperatures rise often to right around freezing or just above.  A regular heat wave!  This gets the bugs and fish active, especially in the afternoons. Midge hatches are the name of the game, and typically nymphing is the way to go this time of year.  We like to use a #12-14 Black Stonefly or Pheasant Tail as the point fly and drop a #18 Black or Red Zebra Midge 18″ behind it.  Total depth of about 6-7 feet should do the trick.  Swinging small Black leech patterns can also be effective.  Look for slack water just below the riffles or at the ends of long runs….