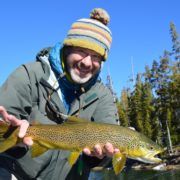 The fishing season in Yellowstone Park closed with a bang!! The weather since our last fishing report has mostly been wet, which is truly a blessing after one of the driest Summer seasons on record here in Wyoming. A lot of this moisture came slow and steady, which kept the rivers around here fishable before they all blew out in last week of the month. The fly fishing on the Upper Snake River as it dropped was off the chart!

Pumpkin brown trout from the Snake River in Yellowstone

I had the pleasure of spending a day with Bob and Adler Mercier chasing browns as the Snake dropped mid-month. Bob was a former hunting guide near Torrington and wanted to show Adler what the great state of Wyoming was all about. We arrived to the perfect storm of conditions for big brown trout- dropping flows, scuzzy weather, and a fresh run of browns up from Jackson Lake. We put several trout in the 20″ class in the net that day and I overheard Adler telling Bob, “Dad, I don’t want to leave Wyoming!” The skies cleared and it warmed up considerably in to the first week of November. We were reaching daytime highs close to 60 degrees as the Park was closing for the year, which is rare to say the least. I had a free day to run up to Lewis Lake with a couple of buddies and we had a blast. We launched into the fog and perfectly still conditions which I had never experienced there before, what a treat!

Where does the fog end and Lewis Lake begin?

We rigged up as the fog cleared and sight fished a handful of spooky Lake trout and even a few nice Browns that had not yet begun to spawn. Our best action was at the inlet to the Lake to cruising trout. The Lake trout near Mac Point were not to be found and the outlet bay held more brown trout.

Fish the Fly owner Jason Balogh is all smiles!