The fly fishing season here in Jackson Hole has begun! Warmer March air temperatures have the bugs in the Snake River moving about. As a result, our Cutthroat trout have taken notice. This week’s weather calls for intermittent snow and colder temps than the beginning of the month. Sunshine and the Spring we all wait for looks to be on the horizon next week.

The Snake River is low and slow out of Jackson Lake Dam. Winter releases continue at 300 cfs. The gauge at Moran is currently reading 385 cfs due to some daily snow melt however. Trough the Jackson Hole valley, the Snake is at 701 cfs and 1330 cfs for Moose and South Park respectively.  Currently Moose, Wilson, and South Park boat ramps are clear. Pritchard should open in the next week. 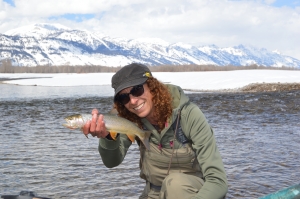 Both Midges and Capnia Stoneflies continue to be the bugs of choice on the Snake River in Jackson Hole. Nymphing has been the most consistent way of finding fish. Surface action can be found in slower water at the ends of riffles and current margins. If you find actively rising trout, then it is best to stay put and fly fish. #16-20 Furimsky BDE’s in black or Olive are a great choice since they are visible on the water. However, your favorite Midge pattern should do the trick.

We don’t often nymph in Jackson Hole, but Spring is the time that most anglers will dig for their strike indicators. Skwala nymphs are becoming active, especially on bright, sunny days. #10-12 Tan/Brown Rubberlegs are a great point fly option. Red, Black, or Purple #16-20 Zebra Midges are excellent Midge patterns. In addition, #14-16 Black Copper Johns are consistent producers.

The Cutthroat in Jackson Hole are not known to be leader shy. Spring is no exception. Nine foot leaders tapered down to 4x are fine for dry fly fishing. Nymph rigs can be fished at 6-7  feet with 3x to the point fly and a 4x dropper off the bend of the hook.

Fly fishing the Salt River in Wyoming is a more intimate fly fishing experience than other Jackson Hole area waters. The Salt River begins its 84 mile course above 10,500 feet on the slopes of Mount Wagner in the Salt River range. It flows south briefly before veering north through the pastoral ranches of Star Valley, WY on its way to Palisades Reservoir.  Along the way it picks up several springs and creeks that add to the flow and keep this smaller river cool all Summer long. Below Afton, WY is where it really takes shape as a trout fishery and floating the Salt River becomes a reality.

Fly fishing on the Salt River in Wyoming is best from mid to late June all the way into November. The Salt River often clears before some other major rivers in the area. Salmonflies and Golden Stones are the first insects to pop and the Cutthroat and Brown trout take notice. Gray Drakes, Yellow Sallies, Caddis and Pale Morning Duns are also on the menu through July. August is terrestrial time on the Salt River where Grasshoppers, Ants, and Beetles bring the river’s best trout to the surface. September continues with terrestrial action, but Mahogany Duns and Blue Winged Olives dominate as October nears.  Nymph and streamer fishing are the ticket towards the end of October and through November as the trophy Brown trout from the Palisades swim upstream on their spawning run.

Fly fishing the Salt River in Wyoming is known for big bug fishing, due to its stoneflies and hoppers. Nymphs are often dropped 1-2’ below these larger flies in a “hopper-dropper” system. Mayfly hatches, especially early and late in the season, offer match the hatch conditions.

The best way to fish the Salt River is from a drift boat since it flows through mostly private land and is lined with Willows. The low flows of late Summer can mean that floats are best with one angler in the boat.

Fly fishing the Salt River in Wyoming is best after runoff from late June – mid November. June and July bring good river flows and Stonefly and PMD hatches. August and September are terrestrial season. Fall sees prolific Baetis hatches prior to full on streamer season through the end of the year.