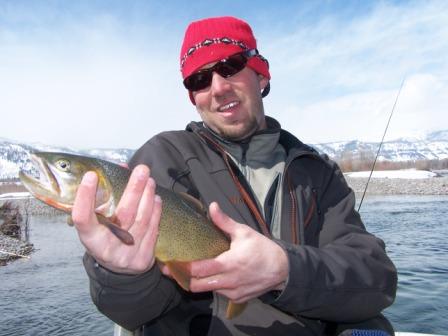 The fly fishing on the Snake River  in Jackson Hole was solid this week! At the beginning of the week the dry fly fishing was very good south of town below the South Park bridge.  Cutthroat were eating Midges and Baetis off the top.  The key was finding the pods of fish and spending some time casting to them. Best flies were Furimsky’s BDE#16 and #18 BWO Sparkle Duns. Lots of water is being released from the Jackson Lake Dam and flows are predicted to be 5000 cfs out of the dam by April 19th.  The increase in flows is slowing the dry fly bite, but streamers and nymphs are still producing.  Cutthroat are holding in their winter lies at this point, but I expect them to start taking advantage of more room in the water column.  The fishing will remain good through the rest of this month and into May when runoff begins. We are at 133% of snowpack, so it’s looking like a later start for our summer season, most likely mid-July for float trips on the Snake River.  Late summer and fall fly fishing is going to be fantastic! Pritchard, Elbow, and West Table boat ramps are all still covered in snow at this point.  Pritchard should open up this week.