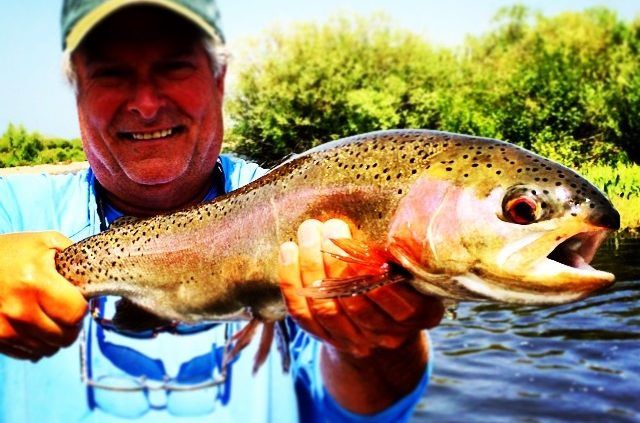 What a month on the Green River! High water through the month of July has kept the fly fishing on the Green in great shape.  Currently flows are at 1210 cfs at Warren Bridge and are dropping.  We’ll have plenty of water to float this river into August this year, probably mid-month or so. It’s best to get the early start to fish the Green River, as the best action is most definitely in the morning.  Gray Drakes, PMD’s, and Yellow Sallies are keeping the trout focused on the surface until about 1pm.  After that nymphing will pickup up a few trout, but it’s best to get that early start and be done early.  If afternoon showers appear, then fishing will go farther into the afternoon especially with Gray Drakes and PMD’s. Look for terrestrials to be a more important part of the equation very soon… Fllies: #10-12 Parachute Adams , #12-14 Quad Adams, #10 Gray Drake Film Critic, #16-18 Pablo’s PMD Cripple, #16-18 PMD Film Critic, #10 Circus Peanut, #10 Purple or Red Chubby Cherb, #10-12 CDC PT, #10-12 Hare’s Ear,  #14 Prince Nymph