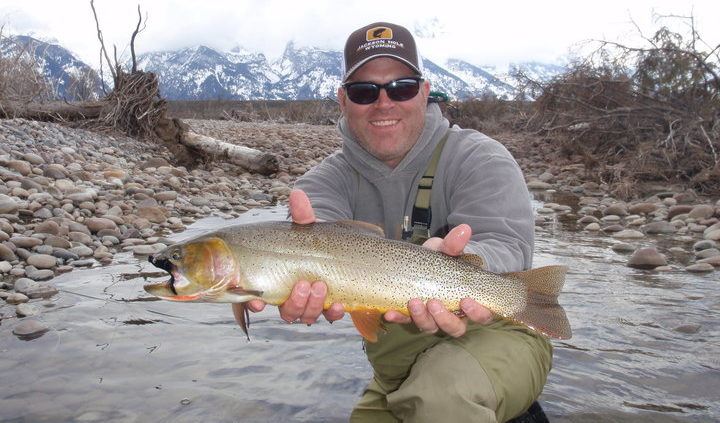 It finally got warm in Jackson Hole!  Well, at least temporarily….   It was enough to get our runoff started on the Snake River.  Consistent warm temperatures will keep the snow pack melting.  This morning we’re adding to the snowpack above 8000′ feet… Pre-runoff fishing on the Snake was phenomenal!  Skwalla stoneflies, Caddis, and BWO’s had the cutthroat in a surface feeding frenzy.  The streamer bite was solid too, especially in GTNP. Check out the photos…

21″ brown trout – a rare catch on the Snake River

The Bureau of Reclamation held their annual meeting to discuss water flows and storage issues in the Snake River basin.  Due to the above average wet weather in April, irrigators in the Idaho Snake River plains did not need to call for water to be moved downstream.  The spring freshet flows below Palisades Reservoir were completed last week.  This is done to trigger the Cutthroat spawn in this part of the system.

Flows out of Jackson Lake Dam are still at winter levels of 400 cfs and will be held there until June 7th. Between the 7th and 15th, flows will be ramped up to 5000 cfs out of the dam.  By July 1st flows will be down to 2800 cfs and held there until the end of September.  This means we won’t be fishing the Snake as early as we had thought, but should be on the lower river by the last week of June.